Because cannabis grows as either a male or female plant, we can isolate the benefits of growing females with or without male interference. Introducing both males and females will result in cross-pollination and thus seeds, which is how a breeder achieves new genetics. On the other hand, removing a male from the garden allows female plants to grow large, seedless buds (called sensimilla). The resinous buds that we consume all come from female plants.

4 ways to make use of male cannabis plants

Seeded buds are generally regarded as lower-quality cannabis. When seeds are present, the smoke becomes harsh and unpleasant. However, growers may introduce male plants to pollinate females if breeding a new strain or collecting seeds for next year’s crop.

Female genetics can be guaranteed by obtaining clones and feminized seeds. If, however, you’re working with regular seeds or are unsure of your seed type, knowing how to determine the sex of your plant is vital to developing new genetics, gathering seeds, or growing sensimilla. Luckily, sexing cannabis plants is easier than one might think if you know when and where to start looking.

How to determine the sex of a cannabis plant 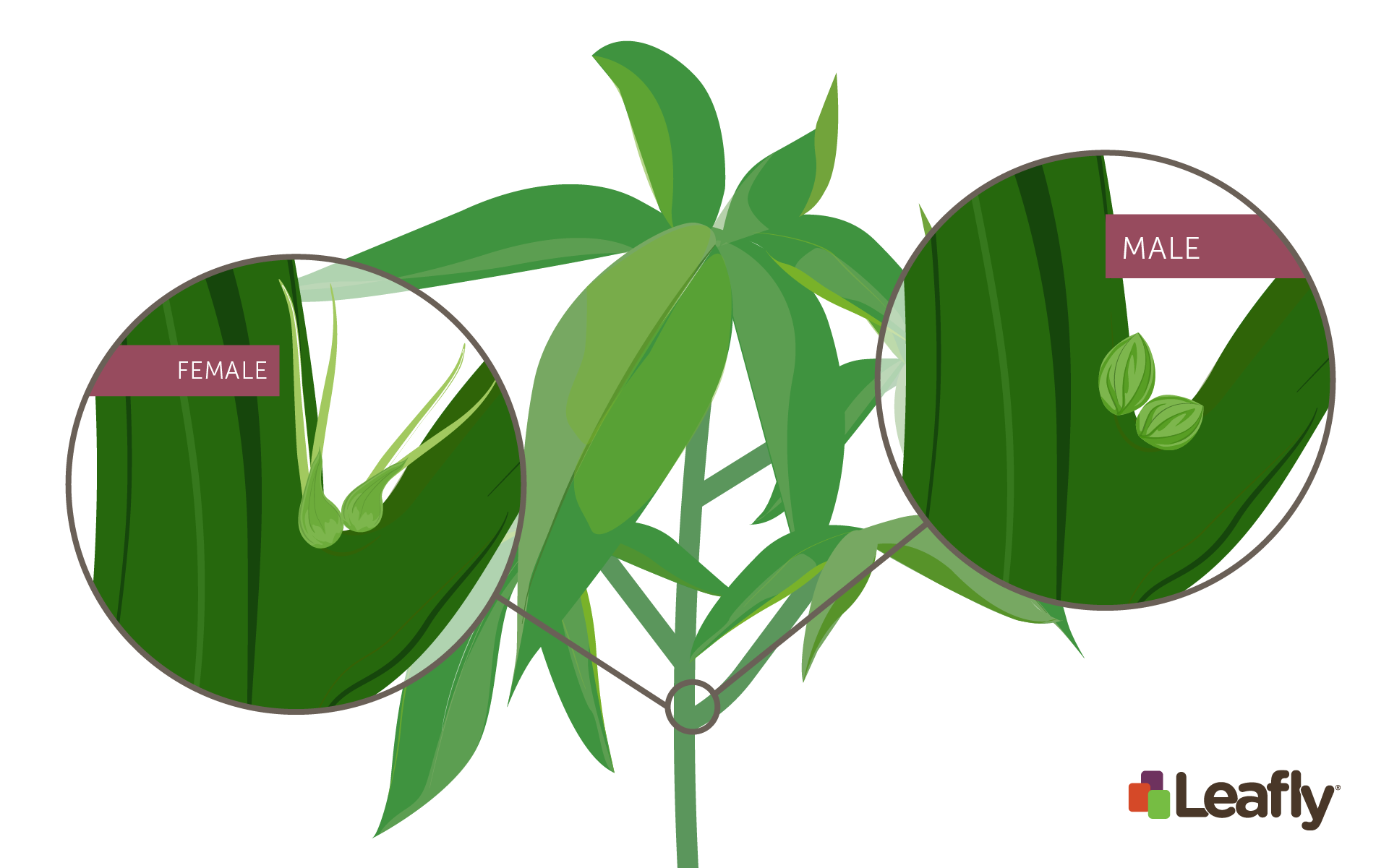 Cannabis plants show their sex by what grows in between their nodes (where leaves and branches extend from the stalk). What starts as a pollen sac on a male plant or a stigma on a female will become what either spreads or catches pollen, respectively. Luckily, we can see these differences weeks before they actually start serving their purposes in the reproduction cycle. These are known as “pre-flowers.”

Pre-flowers begin to develop four weeks into growth, but they may take a little longer depending on how quickly the sprouting phase occurred. By the sixth week, you should be able to find the pre-flowers and confidently determine the sex of your plant.

Cannabis anatomy: The parts of the plant

Pre-flowers can initially be extremely small and hard to identify with the naked eye, but you can use a small jeweler’s magnifying glass to get a better look. Examine the nodes of the plant and look for either the early growth of small sacs (male) or two bracts (female), which will eventually produce the hair-like stigma.

Though there are other methods to determine what sex the plant is, examining pre-flower formation is the most reliable. Removing males early on is important for two reasons: it frees up space in your garden so females grow bigger and stronger, and it prevents males from pollinating females.

What are hermaphrodite cannabis plants? 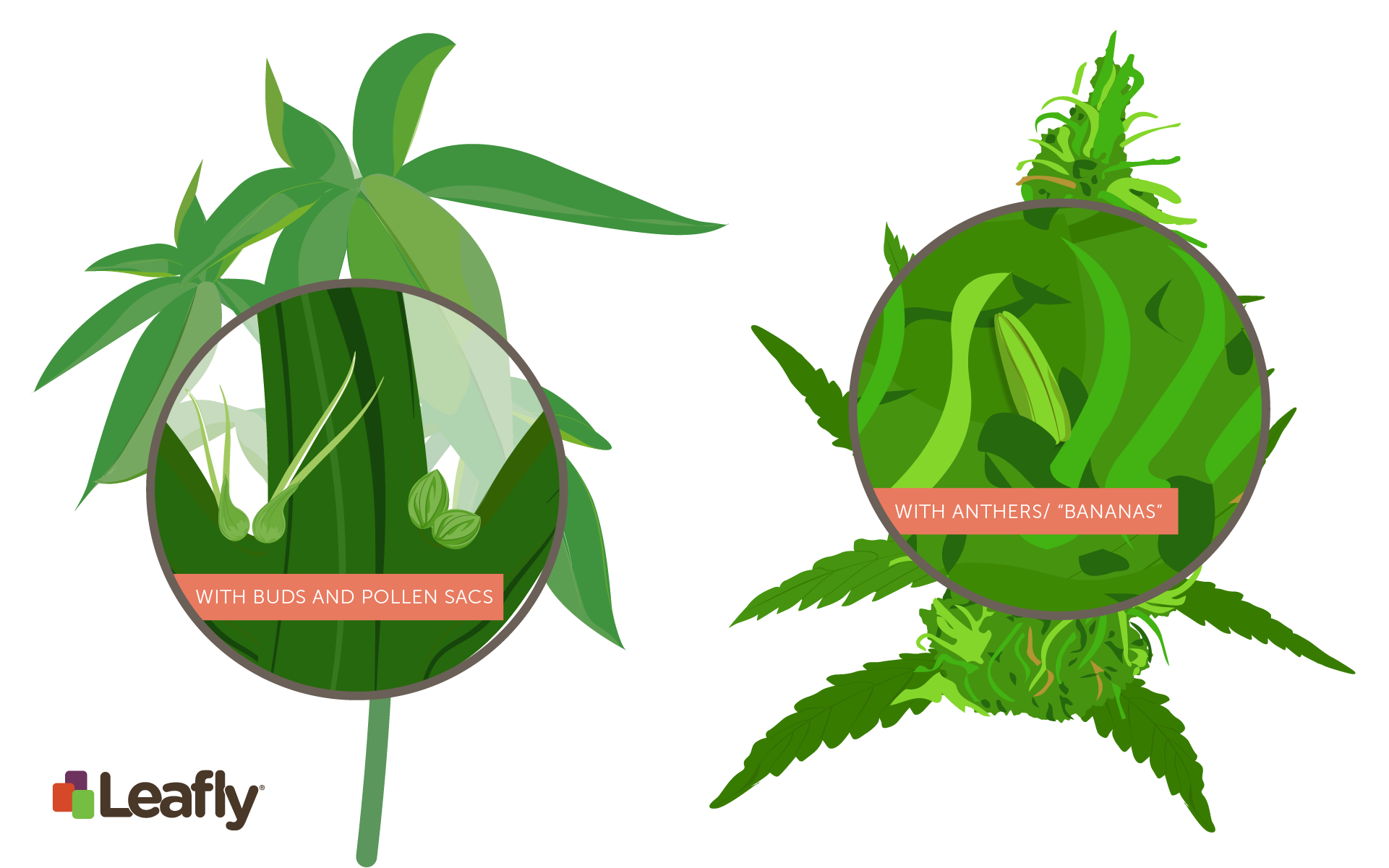 When a female plant develops both male and female sex organs, it is considered hermaphrodite. This means your cannabis plant is now capable of producing pollen that can pollinate your entire garden. “Herming out,” as some call it, is something that generally happens when a plant becomes excessively stressed. Some plant stressors include:

There are two types of hermaphrodite plants:

While both result in pollen production, true hermaphrodites produce sacs that need to rupture, while anthers are exposed, pollen-producing stamen.

Because this occurs when cannabis is under stress, it’s important to monitor plants after they have been exposed to stressors. Indoors, high temperatures, or light leaks are often the cause. Outdoors, a snapped branch might be repaired and then turn into a hermaphrodite.

How to Train Your Cannabis Plants for Better Yields and Potency

The other primary cause of hermaphrodite plants lies in the plant’s genetics. A plant with poor genetics or a history of hermaphrodite development should be avoided to protect your garden. If you notice any pollen sacs or anthers at any point, remove the plant from your garden immediately to prevent pollination of female plants.

If you’re interested in pollinating portions of your crop, remember that pollen is extremely potent and very good at traveling. Keep your males intended for pollination far from your garden space and work carefully with that pollen.